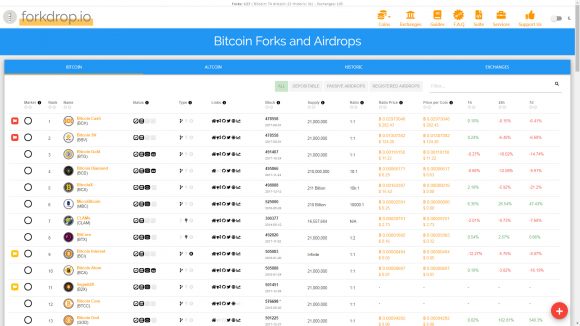 For a lot of people there is only Bitcoin (BTC) and a couple of other popular forks for Bitcoin such as Bitcoin Cash, Bitcoin SV or Bitcoin Gold, but in reality there are much more than just these. According to a website called Forkdrop that is tracking the available Bitcoin, as well as some altcoin forks, the number is quite big already – there are 105 Bitcoin fork projects in total, though not all of them are active or operational yet. Of those 105 in total, 74 are considered active projects relevant to holders of Bitcoin (BTC) and the remaining 31 are considered historic and are no longer relevant. Furthermore of the 74 active Bitcoin fork projects 45 projects have a currently-operating blockchain network capable of transacting and 29 projects do not have a currently-operating blockchain network capable of transacting, however are considered to be still in development.

You might be interested in checking these Bitcoin forks, especially if you have held bitcoins for a long time and are in full control of your private keys/wallets as you might be able to claim some of these coins for free. With some of these Bitcoin forks you are entitled to 1:1 of the respective coins you had in BTC at the time of the fork others have provided airdrops or are still providing for the holders of coins at a specific block at which the fork occurred and a snapshot has been made. The idea is that some of these projects are more or less established and have a decent trading volume and are present on exchanges, so it could be some free money for you or an extra bag of coins to hold for a better future. Either way it is worth checking out the information provided by Forkdrop as it might be helpful and profitable.