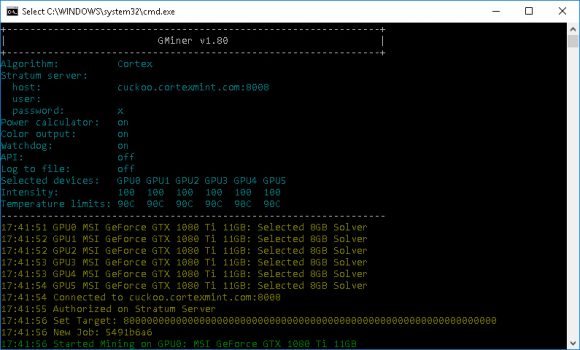 The latest GMiner 1.80 miner adds support for the Cortex algorithm used by the Cortex (CTXC) AI on Blockchain crypto project as well as support more Ethash coins along the recently introduced support for Ethereum: Pirl (PIRL), Callisto (CLO), Metaverse (ETP) and Expanse (EXP). Do note that the DevFee on the Cortex algorithm is currently set at 5%, which is higher compared to the regular 2% for the other supported algorithms, though this is to be expected since the official Cortex liner is only for Linux and GMiner seems to be the first with Windows support. When mining Cortex if you get a weird “Write timed out” error you might need to lower the intensity from the default 100 value, use the -i option with a value for each GPU separated by space (single value will be just for the first video card). It also seems that the power usage for the GPU when mining Cortex is lower than the max TDP value at the moment (further optimizations possible?), so the mining video cards are using less power and run cooler.

The GMiner miner software was originally only an Nvidia GPU miner, although some algorithms are already supported on AMD GPUs as well. Do note that GMiner is a closed source miner for Nvidia and AMD GPUs with binaries available for both Windows and Linux, there is a 2% developer fee built-in the software.

– To download and try the latest release of the Gminer v1.80 Nvidia and AMD GPU miner…