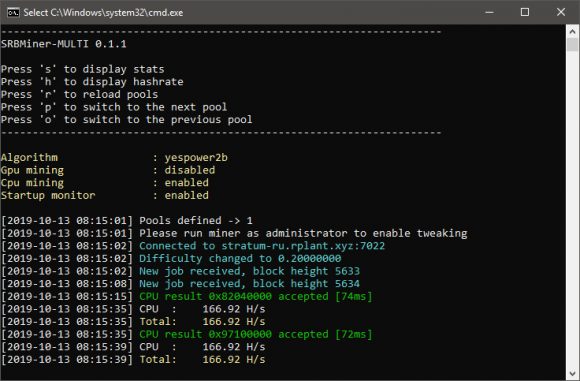 The author of the popular SRBminer CryptoNight AMD GPU miner has just updated his new mining software called SRBMiner-MULTI CPU and AMD GPU Miner to version 0.1.1 Betta adding support for a few new algorithms and some bug fixes. The new miner is targeted at algorithms for CPU mining as well as some CPU and GPU ones for more recent AMD-based video cards (R9 2xx series and newer)… other than the CN-based algorithms that his other AMD GPU miner supports. The new algorithms include: yespowerltncg, yespowersugar, yespowerurx, yespower2b, eaglesong (nervos-ckb) algorithms and there is also added support for SHA with yespower algorithm family.

Do note that just like his CryptoNight GPU miner, this new CPU and GPU AMD miner is also available only for Windows (Linux version might be oming out soon) as a pre-compiled binary and there is a built-in developer fee as follows: 0% for blake2b and yespowerurx, 1.70% for rainforestv2 and 0.85% for all other supported algorithms. The miner does not yet have support for the new RandomX algorithm, but it will hopefully get one at least regarding CPU support in the future, you can find the initially supported algorithms below:

– To download and try the new SRBMiner-MULTI CPU and AMD GPU Miner 0.1.1 Beta…