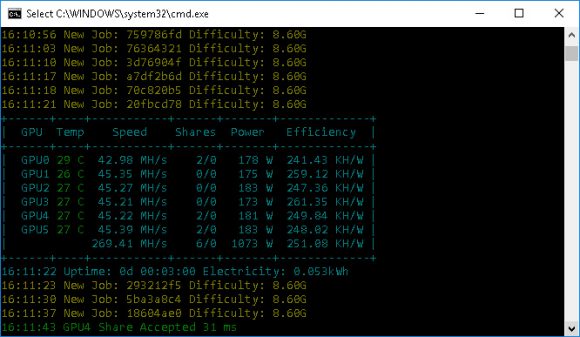 The latest GMiner 1.71 miner has added support for the Ethash algorithm on Nvidia GPUs allowing you to use the miner for mining ETH and ETC for the moment with other coins to be supported in the future. The developer fee of the Ethash algorithm is set at 0.65% instead of the regular 2 percent for other algorithms supported by the miner. Do note that if you are using an Nvidia GPU with GDDR5X video memory such as the GTX 1080 series you should also run the OhGodAnETHlargementPill tool for optimal performance when mining Ethash using GMiner. A quick test has shown that the performance on GTX 1080 Ti with the Pill software running is a little lower than what the latest Claymore Dual Ethereum AMD+NVIDIA GPU Miner v15.0 is capable of delivering, so there might be some more room for improvement in future updates.

The GMiner miner requires an Nvidia GPU with CUDA compute capability 5.0 or later as well as CUDA 9.0 driver support, some algorithms are already supported on AMD GPUs as well, but not all. Do note that GMiner is a closed source miner for Nvidia and AMD GPUs with binaries available for both Windows and Linux, also there is a 2% developer fee built-in the software.

– To download and try the latest release of the Gminer v1.71 Nvidia and AMD GPU miner…