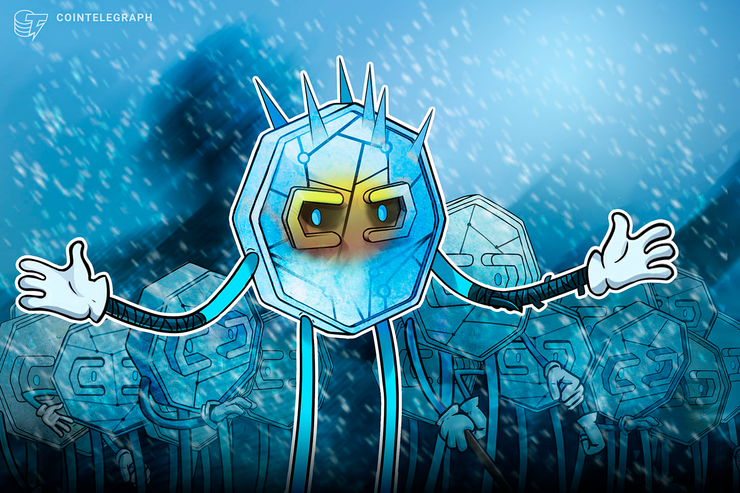 It’s hard to tell who was the first to coin — if you’ll forgive the pun — the name for the dramatic price drop of Bitcoin (BTC) and altcoins as the “crypto winter.” But the name accurately captures the simultaneous collapse of around 2,000 global cryptocurrencies that lost a total of 80% of their aggregate market cap.

The term “crypto winter” probably came into more widespread use after BTC’s price drifted south to around $3,000 per Bitcoin in December of 2018, it’s lowest price in more than a year. For the crypto industry, 2018 was a year of changes due to price corrections — also referred to as the Bitcoin crash and the Great Crypto Crash. The crash caused widespread investor panic and proclamations from the mainstream media that the cryptocurrency “bubble” has ended. Meanwhile, long-time members of the crypto community were not bothered.

“I’ve been involved in this space since Bitcoin was less than $1 each, so I don’t pay any attention to the short term fluctuations,” Roger Ver, CEO of Bitcoin.com, told Cointelegraph. “The price is the least interesting aspect for me.”

But even if we look beyond price, the crypto winter has had a lasting impact on the cryptocurrency and blockchain space. So, how exactly did this so-called “crypto winter” affect the industry?

The depths of winter: The negative impact

A review of past media coverage can help us understand the negative impact of the crypto winter for the industry. The discourse surrounding crypto in 2018 was polluted with a number of scams, Ponzi schemes and all manner of illegal actions that resulted in millions of dollars stolen or missing in dead funding.

One of the most prominent crypto skeptics, Nobel Prize winning economist Nouriel Roubini, claimed in February 2018 that Bitcoin, “the mother of all bubbles,” had started to crash. John Reed Stark, the former head of the United States Securities and Exchange Commission’s Office of Internet Enforcement, warned about an upcoming period ripe “for fraud, manipulation, insider trading, hacking, and a broad range of chicanery.”

Being surrounded by such bad actors and the uncertainty that their behavior created, the genuine projects struggled to have their value seen and heard. As a result, in the words of blockchain startup founder Grace Wong, “many of these legitimate projects retreated completely from blockchain and crypto, waiting for all that noise to settle down.”

Unsurprisingly, the Forbes 2019 “Fintech 50,” a list of the world’s top financial technology firms, included only six blockchain companies. That’s almost half as many as in 2018, when there were 11.

A similar picture can be seen with the job market: Comparative statistics from analysts at job-searching platform Indeed, which shared its findings with Cointelegraph, showed that blockchain and cryptocurrency-related job searches have declined by 52% over the last year (June 2018–June 2019).

From winter must come spring: The positive impact

On the flip side, it is obvious that both blockchain critics and advocates share the understanding that things can only get better from here, which makes the metaphor of “winter” particularly apt.

“The Crypto Winter in my view actually had quite a positive effect on the progress and development of our global blockchain ecosystem,” Daniel Diemers, PwC’s leader for blockchain in Europe and the Middle East, told Cointelegraph. “The flashy startups and ICO projects that were not well supported and managed disappeared in the cold virtual snow, while the better funded, high-quality projects made it through the Crypto Winter.”

Jeffrey Sprecher, CEO of the Intercontinental Exchange — commonly known as ICE and is the operator of the New York Stock Exchange — summed up this perspective of renewed, but cautious, optimism when he stated: “It’s really been helpful that the cryptocurrency industry sort of went into what they call a winter.”

Earlier this year, Emin Gün Sirer, the co-director of the Initiative for Cryptocurrencies and Smart Contracts (known as IC3) and an associate professor at Cornell University, similarly emphasized this idea, saying: “Overall there are some really good signs that the crypto winter washed out most of the scams.”

A quick look at the statistics speaks for itself: 2017, when cryptocurrencies’ prices hit record highs, was also a year of an extreme number of scam projects. As a study prepared by ICO advisory firm Statis Group revealed, an astounding 80% of ICOs conducted in 2017 were identified as scams. The study took into consideration the lifecycle of ICOs run in 2017, from the initial proposal of sale availability to the most mature phase of trading on a crypto exchange. 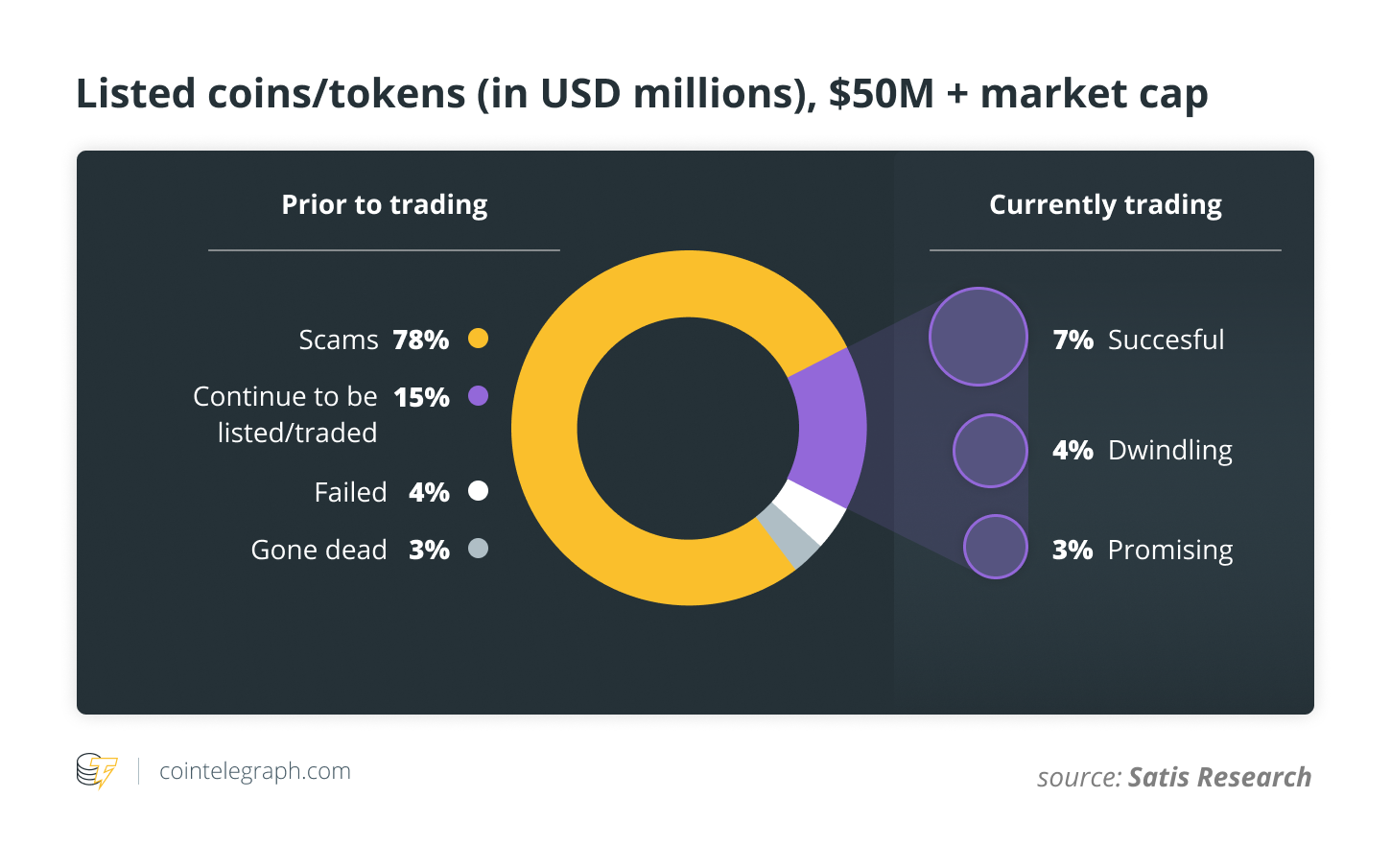 Way back in December 2017, Ernst & Young conducted research that warned that “ICOs have become a synonym for hype, unjustified valuations and excessive risk.”
Later, a new EY survey collected data on ICOs’ performance between January 2018 and September 2018, concluding that “a portfolio of these ICOs is down by 66% since the peak of the market at the beginning of this year.”

The data shows that the ICO market correlates directly with the Bitcoin price and that the crypto winter successfully washed the scammers out from the scene. As a result, the industry has become more complex, robust and structured than it was two years — or even one year ago.

“This was healthy for the ecosystem, as the primary focus shifted to the longer term, and quality projects and technology again became more important than bold marketing statements and airdrop campaigns,” Diemers of PwC said.

This could be a critical advantage in terms of promoting the next, more sustainable wave of growth of the ICO market. PwC’s third strategic report on ICOs states: “ICOs have gained further momentum and are emerging as a workable, alternative form of crowdfunding.” One good example here can be seen in the number of patents related to blockchain tech and distributed ledger technology. Back in 2017, blockchain technology had been predicted by both Forbes and Deloitte to be one of the major technological trends for 2018.

And then in January 2018, Bloomberg revealed its ranking list of companies that filed blockchain-related patents, placing Bank of America, IBM and Mastercard on the first, second, and third places respectively. The article noted:

“Blockchain technology could reshape the global financial system as banks look to use it to speed trading, improve record-keeping and simplify back-end functions.” Another positive impact is related to the regulatory environment. A lot of countries around the world have made several steps toward blockchain and crypto regulation these past two years. For example, the world’s economic powerhouse, the United States, has not exercised its federal power to regulate blockchain technology and cryptocurrencies, although several states within the country have enforced their own legislation — including Arizona, Connecticut, Vermont, Delaware and Wyoming.

The Intercontinental Exchange also took advantage of the crypto winter to purchase crypto assets at a discount for its institutional cryptocurrency trading platform, Bakkt.

Some experts also believe that 2019 is the year when institutional investors will consolidate around crypto, such as as Rohit Kulkarni, head of research for SharesPost, who said that “the ongoing ‘Crypto Winter’ is a healthy cleansing of the ecosystem because the correction is effectively separating long-term value creators from short-term day traders.”

The crypto winter’s positive impact could also be seen in the corporate world. As was pointed out in Deloitte’s Global Blockchain Survey 2019, organizations have changed their opinions toward blockchain technology, focusing on “what business models it might disrupt.” We can most clearly see the positive impact of the winter in the comparison of attitudes in 2018 and 2019 toward blockchain. 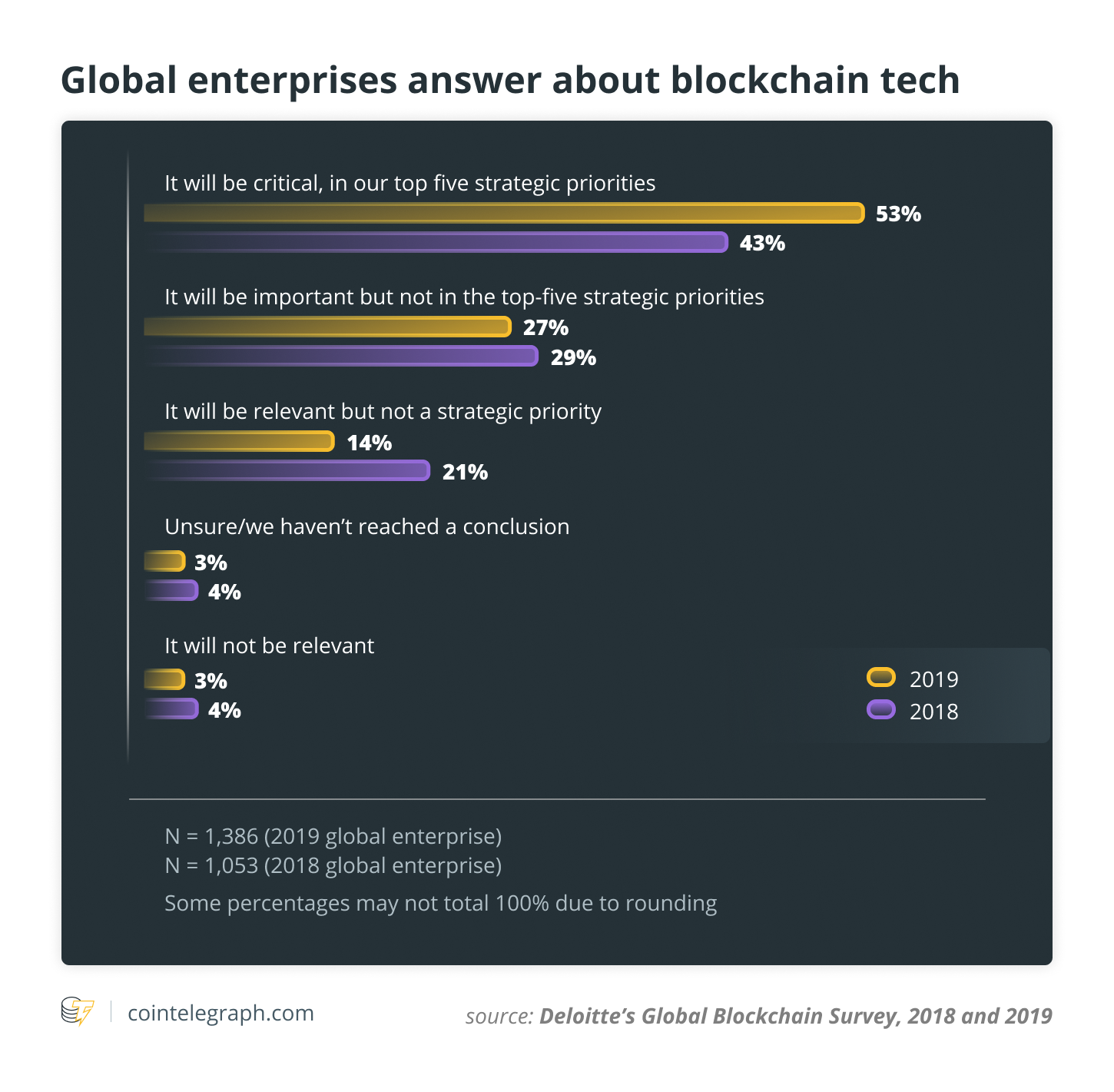 One more good sign for the crypto industry was highlighted in a Cambridge Associates research, which states:

“Though liquid crypto prices have fallen sharply of late, investment activity in the space is booming. Investors interested in the industry need to spend a considerable amount of time learning about the space, getting comfortable with its very high risks, performing manager due diligence, and carefully implementing allocations.”

Is the crypto winter over?

While the crypto winter’s positive and negative impact could be debated among experts, meanwhile, there is a consensus that it’s already over.

Although Bitcoin is still some ways behind its record highs — which peaked in December 2017, when the leading cryptocurrency’s price hit record highs around $20,000 per coin — experts believe that the market’s struggles in 2018 are unlikely to be repeated any time soon, and analysts have declared the end of the winter.

Overall, the cryptocurrency and blockchain tech sectors seem to have been cleaned of scammers and Ponzi schemes, allowing real projects to benefit from the emerging technologies. And Tom Lee, co-founder of Fundstrat Global Advisors, was among the experts to have confirmed that the crypto winter is over.

After the hype surrounding blockchain technology passes, its real global adoption will take place. It is undoubtedly hard to predict the future, but the majority of researchers see the future for blockchain as bright and growing. A Deloitte survey states that more than half (53%) of organizations see blockchain tech among their critical, top-five strategic priorities. PwC research noted:

“Blockchain will generate an annual business value of more than US $3 trillion by 2030. It’s possible to imagine that 10% to 20% of global economic infrastructure will be running on blockchain-based systems by that same year.”

Similar forecasts for blockchain technology can be found in more corporate research, including this from IBM and WinterGreen Research: ”The digital ledger market for blockchain products and services is anticipated to reach $60.7 billion in 2024, up from $708 million in 2017.” The crypto winter was a painful process for the industry. But one that many experts think was necessary and are ultimately relieved happened.

“Crypto Winter culls the herd and tempers the steel,” Shapeshift founder and CEO Erik Voorhees told Cointelegraph. “All but the most tenacious hopes and dreams are crushed, abandoned in the frozen wastes as they lay gasping toward the moon that never came.” He concluded:

“Winter is a season to struggle through, to endure, and the price we pay for the brilliant and beautiful spring that follows.” 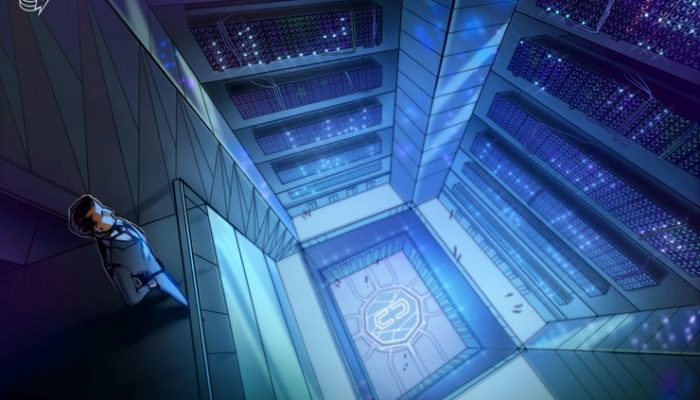