Popular among politicians, media, and central bankers alike is the claim that in spite of all the quantitative easing (QE) and zero-leaning or negative interest rates of current times, inflation is under control. As the statistics show, nothing could be further from the truth. There are some very sly ways governments attempt to mask inflation and these are hidden in plain sight. Should the refusal to look at this ballooning elephant in the room continue, dire economic consequences may become unavoidable.

Also Read: Bad Loans at Big British Banks Jump Over 50% in a Year

The best hiding places are sometimes right out in the open. While central banks like the U.S. Federal Reserve, financial media and global monetary policy groups often point to metrics like the Personal Consumption Expenditures Price Index (PCE) and consumer price index (CPI) as basic metrics for inflation, this approach is argued by many to be inadequate. There are several types of inflation affecting the money supply, as it is not an isolated phenomenon only touching select consumer purchases. In fact, the foundational mechanics of fiat money itself (government issued and mandated money like the U.S. dollar) are inflationary at base, and the issue is compounded outward from there in virtually endless permutations.

Before the advent and widespread use of inflationary paper money by governments and rulers, inflation took the form of monarchs diluting coinage. The value was thus reduced. This practice had serious limits though, and paper currency provided a much more exploitable system. In similar fashion to the mixing of metals, inflation occurs today in hidden places, while prices and face values of the “diluted products” remain the same.

The Fed has set a target inflation rate of 2%, stating:

The FOMC [Federal Open Market Committee] noted in its statement that the Committee judges that inflation at the rate of 2 percent (as measured by the annual change in the price index for personal consumption expenditures, or PCE) is most consistent over the longer run with the Federal Reserve’s statutory mandate.

The mandate referenced is the 2012 institution of a target inflation rate. In spite of the rate and stable appearance of charts and data, however inflation is hiding elsewhere. Whether it’s the shrinking size of Little Debbie snack cakes or the measurements of toilet paper, the effects of inflating the money supply can be seen everywhere. Companies are forced to lower the quality or quantity of their products to keep up with an inflating — and thus weakening — currency. This phenomenon is known as shrinkflation. The gradual loss of value is born by the business (imagine replacing newly inflated stock according to old prices on the books) and the consumer. No matter how stable the inflation rate may be said to be by officials, a real value hemorrhage is occurring.

Further, while politicians and financial media often point to the increasing affordability of tech, losses in affordability of critical goods and services hide inflation in plain sight. Education, healthcare, housing and food have all become markedly less affordable over the past two decades. But hey, at least you have an iPad. 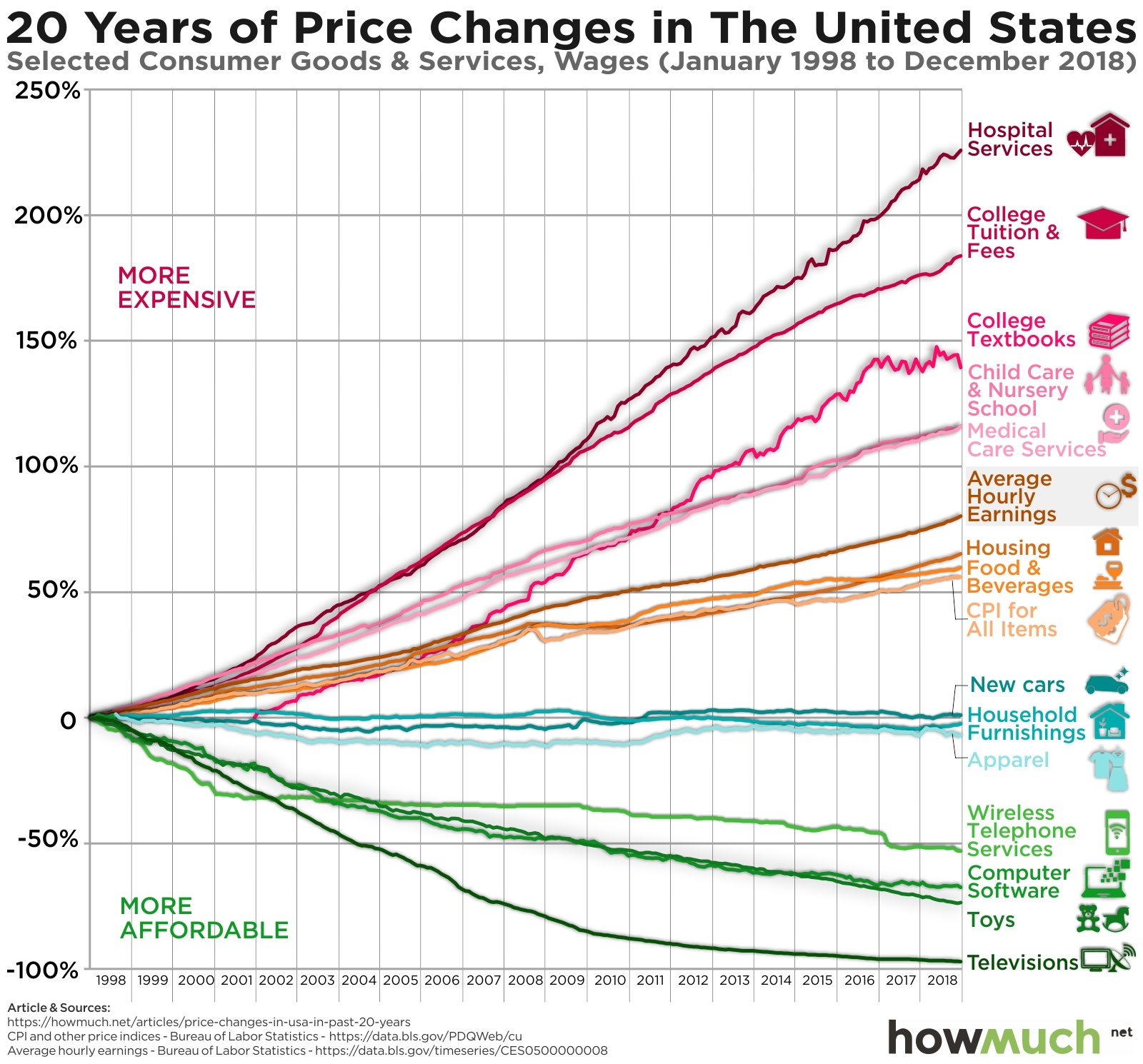 The reason why we raise interest rates, generally, is because we see inflation as moving up, or in danger of moving up significantly, and we really don’t see that now.

Powell may not see it, but that doesn’t mean it isn’t there. While popular figures such as American presidential candidate Andrew Yang may say things like “The federal government recently printed $4 trillion for bank bailouts in its quantitative easing program with no inflation,” this simply is not the case. Newly created stimulus money lurks in banking reserves and often remains confined there, or limited to financial markets, thanks in part to interest rates set by the Fed designed to discourage banks loaning out the reserves to the wider market. As the New York Fed website details:

The other component of IOR [Interest on Reserves] is Interest on Excess Reserves (IOER), which is the interest paid on those balances that are above the level of reserves the DI [depository institution] is required to hold. Paying IOER reduces the incentive for DIs to lend at rates much below IOER.

However, this is much like telling a child to guard a bag of marshmallows and not eat them. Fed policy moves slower than the market, and if IEOR isn’t set appropriately to encourage banks and lending institutions not to lend, that excess cash can come out in a deluge before the Fed can raise rates to discourage it. Thanks to inflation, the money is most useful to the first holders and the expanded monetary based is dammed up and ready to burst anytime on a populace who will be further down the line in the inflation scheme, and thus easy to trap into agreements with the new “cheap” money.

While economists, politicians and other government talking heads say we’re doing alright, it just isn’t the case, as the Federal Reserve’s own data show. The graph below shows a growing household net worth in spite of massive QE in the wake of the global downturn beginning in 2007. Since the Great Recession, the monetary base has increased by around $3.5 trillion. It shot up to all time highs in 2014, tapered off again down to 2013 levels, and, not producing the effect the Fed wanted, is being given another shot in the arm in this latest round of “not QE.” While the high pressure of massive and prolonged Fed stimulus pushes on the doors and seeps through the cracks of lending institutions, commercial real estate prices have doubled since 2009. Asset values have rapidly grown, inspiring lending institutions to provide more loans at lower rates with these inflation-distorted assets as collateral. The bubble created by inflation, in other words, is ready to burst. In his book “The Constitution of Liberty,” renowned Austrian economist Friedrich Hayek writes:

Inflation is probably the most important single factor in that vicious circle wherein one kind of government action makes more and more government control necessary. For this reason all those who wish to stop the drift toward increasing government control should concentrate their effort on monetary policy.

The very idea that an increase in money supply would not devalue that same money is asinine on its face. Government cites deflation and other pressing matters — problems centralized economic meddling itself has created — and refuses to let the market correct failure and reward success organically. In the end, it’s like watching a man with a terrible hangover go on binge after binge to cure his pounding headache. He only finds himself in a worse position the next day. If the man is the Fed, then he further blames his sober friends for the imposition. There’s nothing non-existent about that coming pain after stimulated stupor, it’s just waiting to strike the following day. In the Fed’s case and that of the world economy, the next time may be more of a visit to triage than a mere headache.

What are your thoughts on the supposed lack of inflation after more than a decade of QE? Let us know in the comments section below.