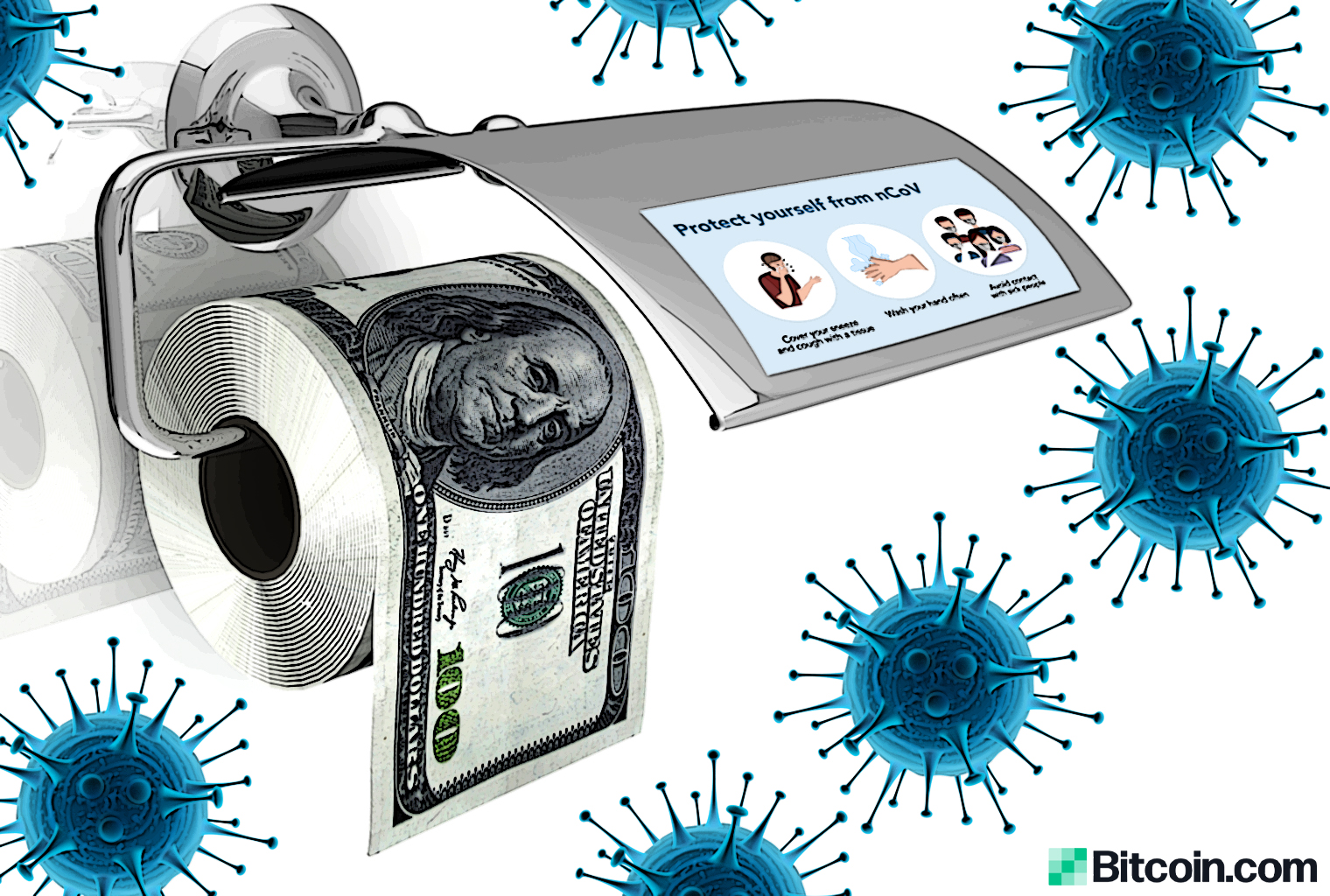 The world has been focused on the coronavirus outbreak that’s claimed 105,612 cases and 3,562 deaths to date. The pandemic has caused government leaders to react and central banks are breaking out tools from their arsenal of monetary easing schemes. The world’s central banks say the public health emergency and international concern over the global economy gives them reason to issue helicopter money, print fresh stimulus and cut interest rates significantly.

Also read: 13 Crypto Debit Cards You Can Use Right Now

The coronavirus pandemic has overshadowed everything. People also don’t realize that the global economy was already facing a recession prior to the outbreak. During the latter half of 2019, news.Bitcoin.com reported on the situation as 37 central banks participated in stimulus and easing practices. Major financial institutions like the U.S. Federal Reserve, the European Central Bank (ECB), the Bank of Japan (BoJ), and People’s Bank of China (PBoC) started using their tools well before the outbreak. In Q4 2019, the Fed not only slashed rates three times, but pumped the balance sheet up significantly while giving private institutions billions via overnight repos. The 16th Chair of the Fed, Jerome Powell, told the press that the central bank’s current easing practices were not at all like the quantitative easing (QE) that took place after the 2008 economic crisis. “In no sense is this QE. This is nothing like it,” Powell stressed on October 8, 2019.

Founder and CEO of Compound Capital Advisors, Charlie Bilello, tweeted about the irony of Powell’s statements on Thursday. “Fed balance sheet moves up to $4.24 trillion, highest level in 18 months, up $482 billion over the last 6 months,” Bilello said, sharing a chart depicting the Fed’s balance sheet. On March 4, news.Bitcoin.com reported on the Fed slashing the interest rate by 50 bps on Tuesday. Powell and the Federal Reserve’s board cited concerns about the coronavirus outbreak. The Fed hadn’t slashed rates by using an “emergency rate shift” since the 2008 Lehman Brothers bankruptcy and before that the 9/11 bombings prompted the Fed to cut rates. 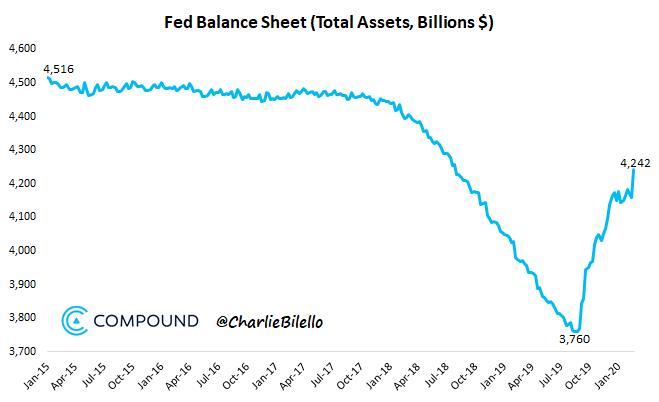 The day after the Fed slashed rates on March 3, 2020, the central bank also reduced capital rules requirement for large financial institutions. The Fed’s move made it so privileged banks can lower the number of reserves they keep on hand. Moreover, some Fed members want to remove the threshold entirely, so banks would not be required to keep a certain amount of assets held in reserve. The coronavirus has also spurred the Fed to start storing recirculated dollars repatriated from Asia in a separate location. Interestingly, the Wall Street Journal reports that the central bank “has no plans to set aside notes from areas [in the] U.S. affected by [the] virus.”

On March 1, both the European Central Bank (ECB) and the Bank of Japan (BoJ) told the public the banks have pledged to “take targeted action” towards helping the global economy while it deals with the pandemic. The ECB and BoJ also cited concerns tied to dealing with the coronavirus outbreak and BoJ Governor Haruhiko Kuroda said the banks would help “stabilize” the economy. Bloomberg reported that China’s central bank, the People’s Bank of China (PBoC), has designated billions of funds to lend in order to combat the coronavirus’s effect on the mainland economy.

The PBoC also said that it would offer these lending programs on a weekly basis if needed. On February 27, the government of Hong Kong revealed it would be airdropping around $9 billion worth of stimulus to the country’s 7 million residents. When the funds were officially approved, Paul Chan Mo-po, Hong Kong’s Financial Secretary, announced:

I have decided to disburse HK $10,000 to Hong Kong permanent residents aged 18 or above, with a view to encouraging and boosting local consumption on the one hand, and relieving people’s financial burden on the other.

Despite the efforts to relieve the economy, global stocks have shuddered and investors are not finding solace in the stimulus and rate cuts. Economists have serious doubts about the central bank’s recent attention toward addressing the virus. Northman Trader author Sven Henrich criticized the central banks’ recent easing practices as he believes the institutions are “the primary driver of wealth inequality.” After the world’s central banks pulled out more tools from their monetary policy belt, Henrich tweeted: “A world without central banks in control is a scary world indeed. People actually have to actively think about their investments.”

Immediately after the Fed’s surprise interest rate cut on March 3, gold prices spiked to a high of $1,638 an ounce. The irony of the precious metals spike is that lots of gold hoarding derives from the central banks themselves and at the end of 2019, central bank gold hoarding touched a 50-year high. Unfortunately, there are no residents from Hong Kong or any other nation who have been offered any helicopter money in the form of hard assets like gold. Meanwhile, similarly to gold, cryptocurrency markets have fared much better than traditional stocks, but not nearly as well as the rise gold saw last week.

Disclaimer: This article is for informational purposes only. Neither the company nor the author is responsible, directly or indirectly, for any damage or loss caused or alleged to be caused by or in connection with the use of or reliance on any ideas, software, websites, concepts, content, goods or services mentioned in this article.

Are you looking for a secure way to buy Bitcoin online? Start by downloading your free Bitcoin wallet from us and then head over to our Purchase Bitcoin page where you can easily buy BTC and BCH.